Featured Ads allows you to highlight certain ads over others, making them more visible than regular ones.  This helps to promote certain kinds of ads, or allow you to provide premium fee plans that give users the choice of having this increased visibility.  A featured ad in the system appears like this (default style):

.awpcp_featured_ad_wrapper {
border: 2px solid #00cc00 !important;
/* If you want to insert a backround image, uncomment the following line of CSS and replace with the path to your image: /
/ background-image: url("featured_ads.jpg") repeat scroll 0 0 transparent; /
/ To change the background color, change the hex code in the following css rule. */
background-color: #FFFF8E;
}

Featured Ads requires very little configuration.  First, install the plugin:
On your WP admin dashboard, click Plugins->Add New. At the top, click Upload and then find the downloaded ZIP file for the module on your local computer. Click OK to start the upload. Activate the plugin when you’re done to complete the process.

After that you also need to update the Ad Listings page layout template, as follows:

Find the following in your Ad Listings page layout HTML:

After that, Featured Ads will appear in a different style. Your site may already automatically include that $isfeaturedclass variable, which means you don’t have to change it yourself.

Featured Ads will add some small additions to existing admin areas, such as the Fees admin area.  With Featured Ads installed, you have a NEW option to set a plan to “Featured Ad Pricing” like so: 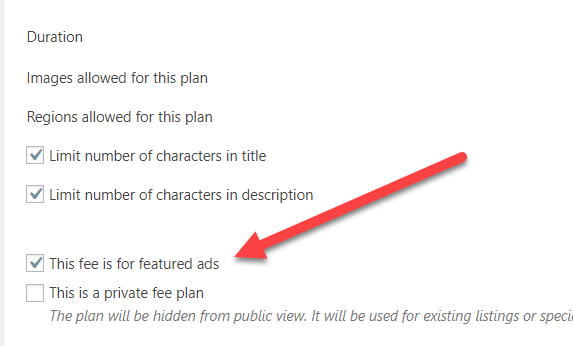 When you check “This fee is for featured ads” on a fee plan, it means that any ad placed under the fee plan will be considered “Featured”.

You can also make ads featured on an individual basis. Here is a short animation showing you how this is done: