This module allows website owners using AWPCP to monetize their classifieds pages through banner advertisements. These banners can be sold and managed through the admin interface and rotated throughout the AWPCP classifieds section in various locations. It can be used with AdSense, but is intended for use with banner ad sales you do directly.

A Sale Representative has the same capabilities as a Subscriber, except they also can create Campaigns.

Those dimensiones can be adjusted from the module settings, going to Campaigns > Ad. Positions in the admin dashboard. 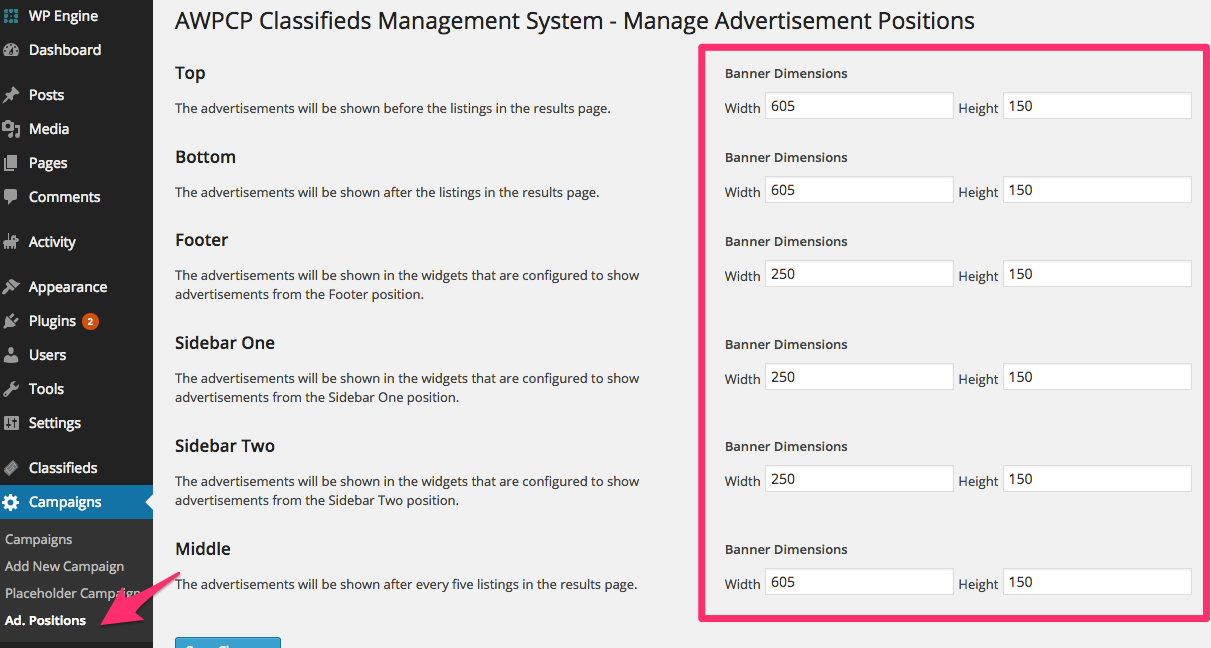 In order to decide which banners to show and when, administratros and SR need to create Campaigns. A Campaign is created from the Campaigns > Add New Campaign menu item. At first all the information you need to create a campaign is a start date, an end date and whether the campaign is going to be enabled or disabled. Don’t worry if you don’t have a value for properties yet; they can be changed later just as easy.

When a you create a Campaign, you are redirected to a special page where you can continue editing the campaign. Now there are more fields available. You can start creating Campaign Sections and defining the Campaign Content.

A campaign section defines the category of listings, the page of results and the positions where the campaign is going to be active. If you want a campaign to show the top banner in the first page of results for the listings in the California > Auto/Trucks category, then you will create a Campaign Section like the one below:

There is no limit in the number of campaign sections that you can create, so your campaign can be configured to show banners every where.

As soon as you create the first Campaign Section, the page updates itself showing a new kind of form. With Campaign Sections you define where and when to show banners. The new forms allow you to define the content of the banners for each advertisement position.

In the example above we created a Campaign Section to show the top banner in the list of listings that belong to the California > Auto/Trucks category. Now, with the Campaign Content forms, you are going to control the actual content of the banner: 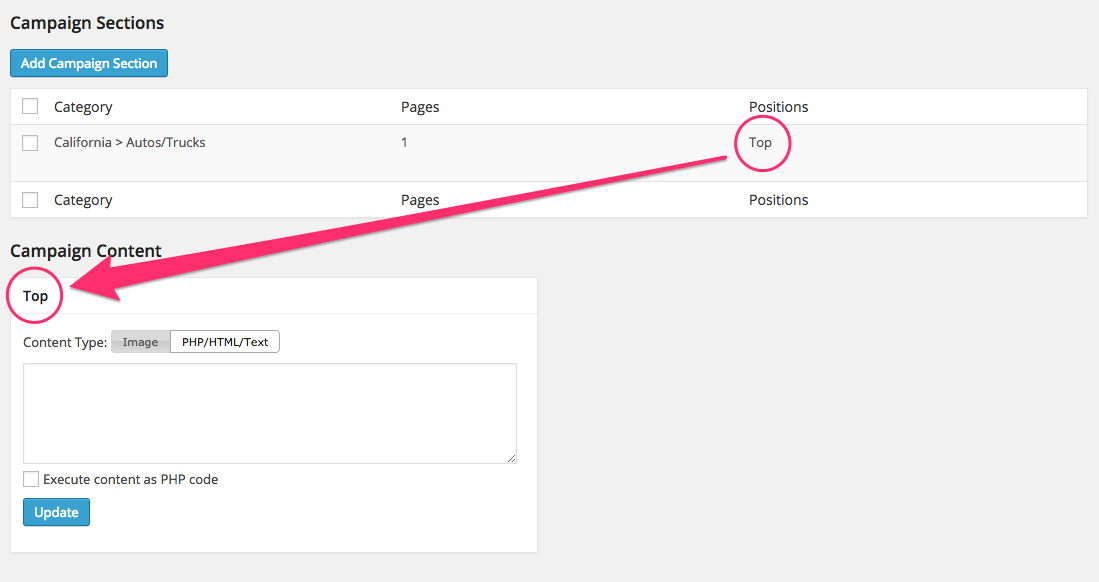 As you add more Campaign Sections targeting other advertisement positions, more Campaign Content forms will become available, allowing you to define the content for each position independently. 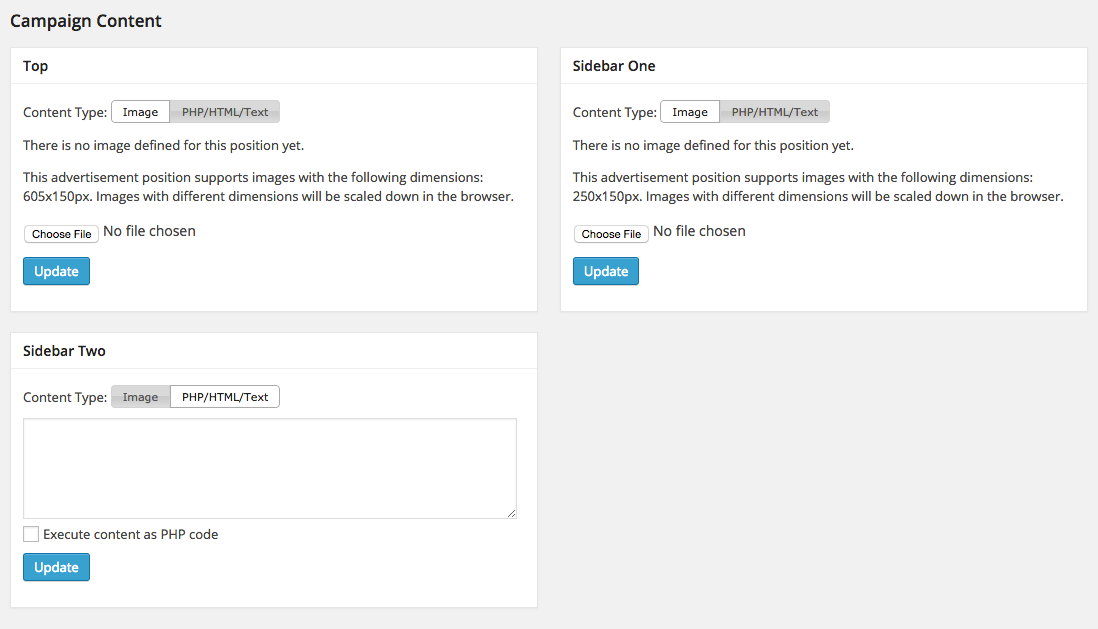 There is a special type of campaign that is used to show banners for positions where other Campaigns are not active. We call it the Placeholder Campaign. It work like this: if none of the defined campaigns have a Campaign Section for the bottom banner, in the first page of listings in the Furniture category, the banner defined for the bottom position in the Placeholder Campaign will be used.

The Placeholder Campaign has no Campaign Sections because, as explained above, it applies for all positions, in any page of results, for listings in all categories.

Before you create your Placeholder Campaign, is important that you consider how many results per page do you want to show. This number is important because it controls how many middle positions you will have available per page of results. Remember that a spot for a banner in the middle position will be available after every five listings, so if you are showing 25 listings per page, you will have up to 4 middle advertisement positions, and you will be able to show different content for each.

It is important to think about that number before creating the Placeholder Campaign, because when the campaign is created, it will be pre-loaded with a content form for every possible advertisement position, given the current configuration. If you change the number of listings to show per page, after the Placeholder Campaign has been created, you may end up with less content forms, restricting your ability to change what is being shown in the missing positions.

To change the number of listings to be shown per page, go to Classifieds > Settings > Ad/Listings and look for the Pagination Options setting:

Uncheck all of the pagination options and enter the number of results per page you want as the value for the Default number of Ads per page setting.

It is important to disable all pagination options to prevent users from changing the number of results per page. If they are allowed to change how many results are shown in each page, it would be really hard for you and the plugin to control haw many middle advertisemnt positions are available in the website, because it will all depend on the user preferences.

The form to edit a campaign placeholder in a website where up to 3 middle positions are available, looks like the form in the image below: 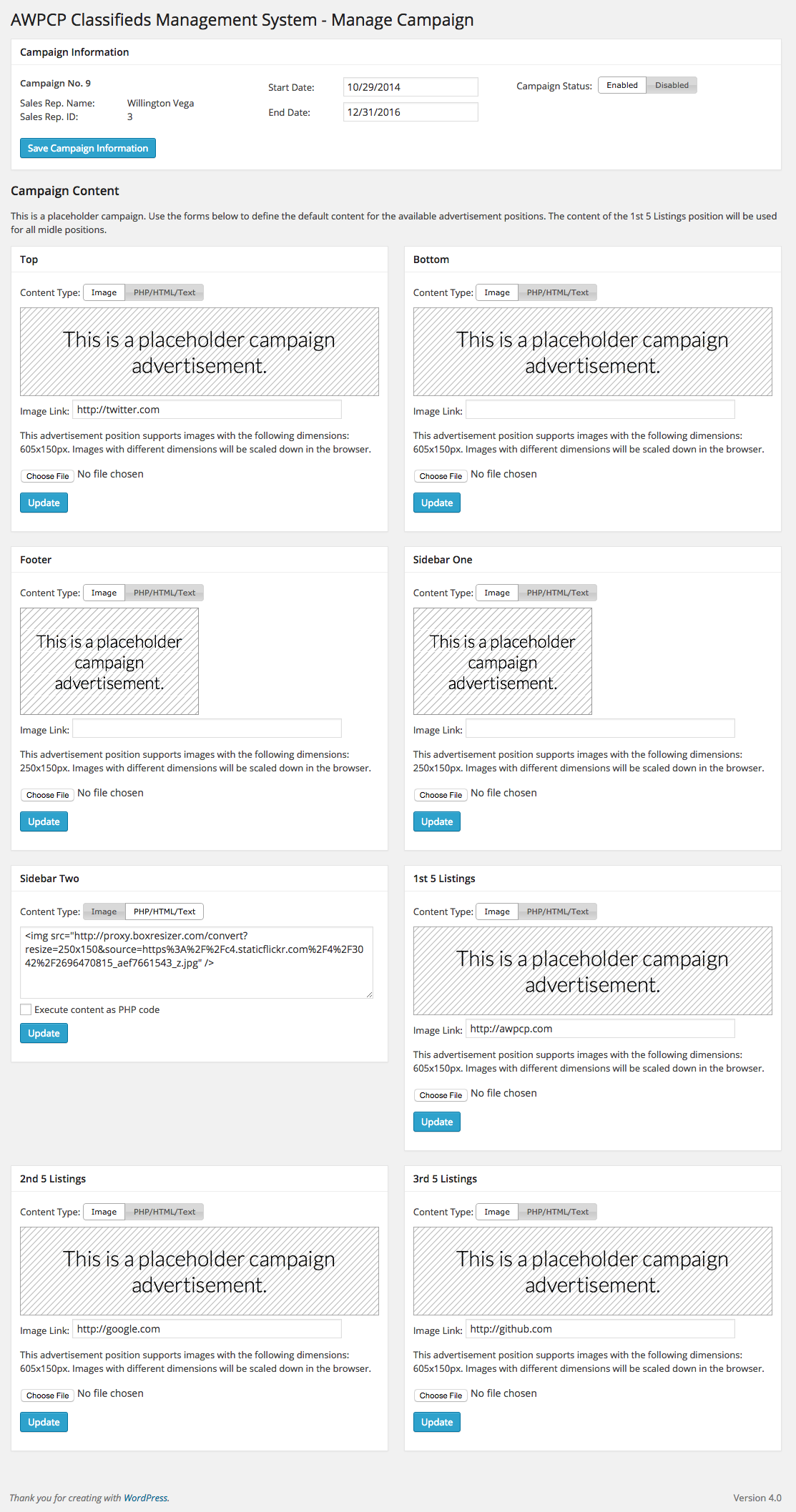